This thesis describes some novel aspects of the regulation of salt and water secretion in the intestinal epithelium. This process is not unique for the intestine, but a common and necessary function of many other organs, including the stomach (gastric juice), kidney (urine), sweatglands (sweat), gallbladder (bile), testis, some endocrine glands and the lungs. Also most of the transport systems involved are not uniquely expressed in the intestine but shared by a variety of other salt transporting epithelia; this is exemplified by the generalized exocrinopathy seen in cystic fibrosis (CF), a genetic disease characterized by a mutation in a cr channel protein (designated CFTR) commonly expressed in epithelial tissues [Riordan et a!., 1990; Kartner et a!., 1991; Anderson et al, 1991 a; Bear eta!., 1992]. Some characteristics of ion transport regulation, however, are exclusively found in intestinal epithelium. These include: i) the pseudohormonal action of microbial enterotoxins (e.g. cholera toxin, heat labile and heat stable Escherichia coli toxin) on intestinal salt and water transport, resulting in secretory diarrhoea (SD) and dehydration: SD is still a major cause of morbidity and mortality among children in the developing countries [Guerrant, 1985]; ii) the role of cGMP and a cGMP-dependent protein kinase as intracellular mediators of intestinal ion secretion [DeJonge, 1981; DeJonge and Lohman, 1985; DeJonge and Rao, 1990]; iii) the presence of G-protein-activated phospholipase C at the brush border membrane, despite the absence of G-protein-coupled hormone receptors at this subcellular region [Vaandrager et a!., 1990]; iv) the CF defect in cholinergic/Ca2 • -mediated activation of intestinal cr secretion [De Jonge et a!., 1987; Berschneider et a!., 1988; De Jonge et a!., 1989], in sharp contrast to the normal Ca2 • -linked cr channel activation observed in most other CF-affected epithelia (airway [Boucher eta!., 1989; Wagner eta!., 1991], sweat gland [Sato and Sato, 1984]). This and some other unique aspects of intestinal signal transduction described in this thesis, render the study of ion transport regulation in the intestine especially rewarding. 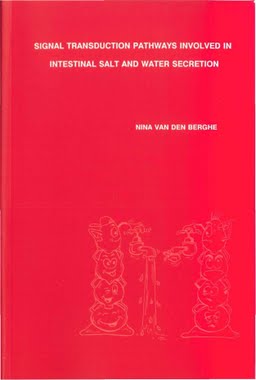