The Viennese students of Civilization

Humility, Culture and Economics in Interwar Vienna and Beyond

In this dissertation it is argued that the scholars who are usually known under the banner Austrian Economists are better understood as the Viennese students of Civilization. By understanding the group of scholars, consisting of Carl Menger, Friedrich von Wieser, Joseph Schumpeter, Ludwig von Mises, Friedrich Hayek among others, as Viennese students of Civilization we are better able to understand their unique contribution.
Contrary to many economists - both then and now - the Viennese students of civilization consider the economy not as a self-regulating natural order, or a system which can be planned, but as cultural process. Just like language and law, markets emerge and develop from human interaction. When the Viennese conceive of the market as a cultural process it means for them that the market has important cultural effects and is sustained by what we could call a market culture. In this dissertation the cultural effects of the market are explored especially as they relate to restraint; the central element of civilization for the Viennese scholars. It is argued that restraint is considered the central feature of civilization by a wider group of Central European scholars including Freud, Malinowski and Elias.
The Viennese students of civilization, especially Wieser, Mises and Hayek argue that they live in a particularly unrestrained age. This has fueled opposition to market and other cultural processes which are not rationally constructed. The acceptance and cultivation of the market comes at a cost they argue; this cost they call the ‘strain of civilization’. That cost is primarily the restraint of our innate instincts. Civilization requires the acceptance of certain norms, of individual responsibility, the acceptance of differences and inequality. This price to be paid is termed ‘the strain of civilization’. This price however is no longer accepted by social scientists who preach unrestrained rationalism. And it is no longer accepted by mass political movements such as socialism and fascism which promise they can relieve the people of this strain.
Particularly during the interwar period the Viennese students of civilization feel that their civilization is in acute danger. They analyze this revolt, and their own role in this process. Initially their response is largely passive and accepting. This attitude is characteristic of a Viennese cultural trait known as ‘therapeutic nihilism’. The social scientist, or rather student, can study the large cultural processes, but they are outside his or her control. Stronger yet, the Viennese students believe that many of their contemporaries are under the illusion that they could predict the course of society, and ultimately of history. This outsider-perspective, however, is seriously challenged during the Interwar period, especially during the rise of fascism. The Viennese intellectuals increasingly realize that they bear a responsibility toward their culture, and they might even possibly have some influence on its fate. This puts them in an awkward position. Their work is becoming more political and idealistic, features which they had criticized in the work of others. Especially Hayek’s ‘The Road to Serfdom’ and Popper’s ‘The Open Society and its Enemies’ are examples of this tension; the tension between the realization of the limited power of the scholar, and the desire to defend a civilization under pressure. In their work they apologize to their colleagues for the political nature of their work, but they feel obliged to write this work, which they consider ‘their war effort’. Ultimately, although reluctantly, they engage in an attempt to draw up ideals and plans for the future. They regain some hope, in part because they no longer write for a Continental but for an Anglo-Saxon audience. It is also in this sense that Hayek and Popper are engaged in a new kind of liberalism, one that is resistant to mass political movements and the desire to throw off cultural restraints.
This dissertation draws heavily on the cultural histories of fin-de-siècle and interwar Vienna. It shows similarities in the problems faced by artists, novelists, scientists and politicians in Vienna. Such similarities sometimes were sometimes incidental, but they also arose out of the interactions in the Viennese circles. In the partly overlapping circles broad intellectual conversations were stimulated and this greatly contributed to the creativity of the contributions emerging out of Vienna, especially during the interwar period. It is argued that the prominence of these circles partly accounts for the fact that the Viennese students of civilization crossed many interdisciplinary boundaries, and that their intellectual concerns were as much driven by social and political issues as it was by scientific concerns. 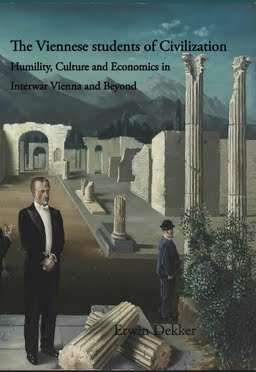