Craniofacial and Dental Aspects of Crouzon and Apert Syndrome

The cranium of an infant or young child consists of different bony plates intersected by sutures. A calvarial suture is a type of fibrous joint in the cranium. The growth of the cranium is effectuated mainly in the sutures. Two important functions of the calvarial sutures are to secure flexibility of the cranium during passage of a baby through the birth canal, and to facilitate growth and separation of the calvarial bones during intrauterine and perinatal life (Posnick and Ruiz, 2000). It is normal that the calvarial bones are separated by the sutures at the time of birth. Until the age of six years the sutures allow bones of the skull to move. After the age of six years skull growth mostly takes place by apposition of bone at the outer side of the skull and resorption of bone tissue on the inner side of the skull (Herring, 2008). Premature fusion of one or more sutures in the skull is defined as craniosynostosis (Virchow, 1851; Herring, 2008). The prevalence of craniosynostosis occurs one in 2,000 to 2,500 live births (Cohen and MacLean, 2000). The prevalence of nonsyndromic craniosynostosis at birth is estimated to be three to five per 10,000 births. The prevalence of syndromic synostosis at birth is significantly lower, estimated in the range of 0.15 per 10,000 births (Cohen and MacLean, 2000). When craniosynostosis is part of a syndrome, different syndromes with craniosynostosis show unique phenotypes, but share clinical features (Cohen, 1986; Gorlin et al., 2001). Initially syndromes were classified on the basis of the clinical findings, but now most of the syndromes are defined according to specific genetic mutations (Glass et al., 1994). Frequently children with craniosynostosis have associated anomalies and conditions including adverse effects on sensory, motoric, cardiovascular and respiratory functions (Cohen and Kreiborg, 1993; Turvey et al., 1996; Anderson et al., 1997; Renier et al., 2000; Bhattacharjee et al., 2009). The Apert, Crouzon, Saethre-Chotzen and Muenke syndromes represent the more commonly identified syndromes with craniosynostosis. These familial craniosynostosis syndromes share many common features, including midface hypoplasia, cranial base growth abnormalities, abnormal facies, and limb abnormalities. A short overview is given of the common syndromes. 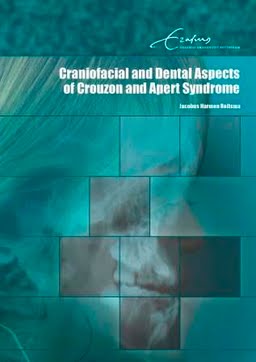