Nephrolithiasis (renal stone disease) is a common disorder in industrialized countries. About 10% of the population will develop kidney stones during lifetime. Approximately 50% of the patients that formed a renal stone for the first time will do that again within a period of 10 years. Although renal stone disease generally is not life threatening, stones can be very painful and invasive clinical interventions are required for their removal. Since nephrolithiasis is such a widespread disease, clinical procedures and the allied absence from work have a substantial economical impact. For that reason, it is important to disclose the abnormalities underlying stone disease. With this knowledge we might be able to develop strategies to prevent stone recurrence. Risk factors for stone formation are a positive family history of stones, nutrition, nutritional deficiencies, life style and associated diseases. Excessive intakes of salt, animal protein and oxalate, as well as insufficient intake of fluid, vegetable fibres and calcium increase the risk of stone formation. Specific dietary advice and/or pharmacological interventions can lower the risk of recurrence for some patients. In the kidneys, concentrated urine is produced. Each day, 180 litres of fluid are filtered at the glomerulus. During this process, essential nutrients and salts are reabsorbed together with most of the water and waste products are excreted. The concentration of components that are not or less extensively reabsorbed rises towards the end of the nephron. When super saturation occurs, i.e. when the concentration of salts gets too high to be kept in solution, crystals can spontaneously be formed (nucleation). Urine normally contains compounds that interfere with the nucleation, growth, agglomeration or retention of crystals. Renal stones can be formed when crystals are not eliminated with the urine, but are retained in the kidney. Different theories exist about the retention of crystals in the kidney. According to the “fixed particle” theory, crystals grow and aggregate until they become too large to pass through the tubular lumen and become e trapped. In contrast, according to the “free particle” theory, crystal retention could be dependent on the interaction between the renal tubular epithelium and the crystals, even when those are small. The epithelium has to become susceptible to crystal binding, which might occur under pathological conditions. Urinary constituents can influence the interaction between crystals and between crystals and the epithelium. In Chapter 2, we investigated the inhibitory effect of urinary components on CaOx crystal binding to a susceptible epithelium. Crystal binding was studied using renal tubular epithelial cell lines with characteristics from different parts of the nephron. Since hyaluronan (HA) was earlier identified as major crystal binding molecules in MDCK-I cells during migration and proliferation, the role of HA in crystal binding was more extensively investigated in different cell lines (Chapter 3). The fate of crystals that have been bound to the renal tubular epithelium varies depending on the origin of the epithelium. Proximal tubular epithelium usually does not encounter crystals and do not display defence mechanisms against their retention. Crystals that are retained by this cell type are subsequently internalized. In contrast, distal tubule/collecting duct cells often come in contact with crystals and are normally protected against crystal binding. The epithelium from this part of the nephron can be turned into a crystal-binding phenotype during pathological conditions. Even then, crystals are not internalized by this cell type ( Chapter 4). It is believed that CaOx crystals that are taken up by renal tubular epithelial cells act as stressor, leading to cell activation or injury. For this reason, we investigated the effects of long-term exposure of confluent renal tubular epithelial cells grown on permeable supports to a high dose of CaOx crystals (32 µg/cm2). Our studies showed that collecting tubule cells (MDCK-I), that were protected against crystal binding, did not bind take up or respond to crystals. Proximal tubular cells, by contract, bound and internalized CaOx crystals, after which an early and a late response could be distinguished. The early response was characterized by an increased secretion of prostaglandin E2 (PGE2) and a proliferative response. At the same time, crystal-containing necrotic cells were released. After this immediate response, PGE2 levels declined to control levels and crystal-containing cells remained incorporated in the normal functioning monolayer. COM triggers acute inflammation and necrosis in proximal tubular cells, but do not induce tissue injury in collecting duct cells (Chapter 5). Calcium oxalate (CaOx) is the most common component of renal stones. The soluble amount of CaOx is about fourfold higher in normal urine than in water. Oxalate has a bigger influence on the soluble amount than calcium. Urinary oxalate is increased in many idiopathic stone formers. This might be ascribed to increased intestinal calcium absorption, increased bone resorption and decreased renal tubular calcium reabsorption. Oxalate is believed to be toxic to renal tubular epithelial cells. We investigated oxalate toxicity using our two-compartment cell culture model, comparing proximal tubular cells and collecting tubule cells. Contrary to our expectations, physiological oxalate concentrations did not exert damage to either cell type. At extreme supraphysiological concentrations, oxalate did induce morphological alterations, inflam­matory responses and cell death (Chapter 6). 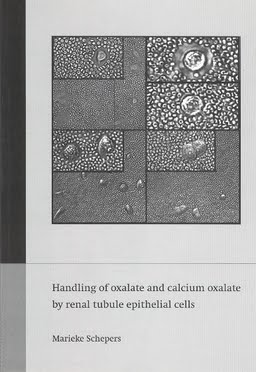