Over the last decades, the international social policy debate has been increasingly focusing on informal social security as a ready made alternative to state driven mechanisms. This is especially the case in developing countries, where the declining administrative and political capacity of most governments to cope with rising poverty rates calls for a different kind of approach. Analysing social security in the urban fringe of Lilongwe City, the capital of Malawi, this study critically questions current policy approaches and underlying analytical assumptions, which the author argues, are still closely linked to a modernist notion of the concept. The analysis of urban social security, including familial, communal and associative networks as well as state services, reveals that the social security practices of urban migrants are a patchwork of formal, informal and traditional actors, mechanisms and strategies. People not only mix state and non-state institutes and institutions, anchored in different social, economic, political, cultural and legal domains. Engaging with the societal praxis, the author shows that people, in their effort to cope with the daily insecurities, also create new social security strategies, continuously re-negotiating their function, meaning and content. The analysis of social security as an intrinsic aspect of societal practice and organisation also opens up a different perspective on migration, urbanisation and the formalisation of living and working condition. Rather than necessary preconditions for a welfare state to develop, the author shows that migration is intrinsic to the functioning of a wider rural-urban trans-local social security economy, within which people move, and within which the city is just one place amongst many others. At the same time, the study shows that peoplesâ capacity of working it out is increasingly narrowing down. The social and economic decline due to structural adjustments, combined with the demographic collapse caused by HIV/AIDS, perforate social network relations, diminishing the availability of productive and reproductive resources to care. Rising insecurities are also changing migration behaviour and the face of the city. While more people move to town for social security and care, mainly settling in the rural-urban borderlands of the city, the fringes of town increasingly provide the urban normality as well for those who have been marginalised from within the city and modernity by the political and economic liberalisation process, like the civil servants. 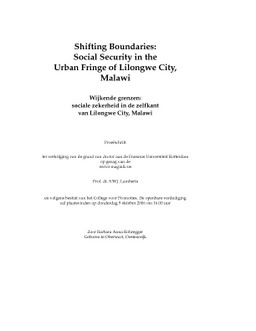