Background: In recent years, meters for continuous monitoring of interstitial fluid glucose have been introduced to help people with type 1 diabetes mellitus (T1DM) to achieve better control of their disease. Objective: The objective of this project was to summarise the evidence on the clinical effectiveness and cost-effectiveness of the MiniMed® Paradigm™ Veo system (Medtronic Inc., Northridge, CA, USA) and the Vibe™ (Animas® Corporation, West Chester, PA, USA) and G4® PLATINUM CGM (continuous glucose monitoring) system (Dexcom Inc., San Diego, CA, USA) in comparison with multiple daily insulin injections (MDIs) or continuous subcutaneous insulin infusion (CSII), both with either self-monitoring of blood glucose (SMBG) or CGM, for the management of T1DM in adults and children. Data sources: A systematic review was conducted in accordance with the principles of the Centre for Reviews and Dissemination guidance and the National Institute for Health and Care Excellence Diagnostic Assessment Programme manual. We searched 14 databases, three trial registries and two conference proceedings from study inception up to September 2014. In addition, reference lists of relevant systematic reviews were checked. In the absence of randomised controlled trials directly comparing Veo or an integrated CSII + CGM system, such as Vibe, with comparator interventions, indirect treatment comparisons were performed if possible. Methods: A commercially available cost-effectiveness model, the IMS Centre for Outcomes Research and Effectiveness diabetes model version 8.5 (IMS Health, Danbury, CT, USA), was used for this assessment. This model is an internet-based, interactive simulation model that predicts the long-term health outcomes and costs associated with the management of T1DM and type 2 diabetes. The model consists of 15 submodels designed to simulate diabetes-related complications, non-specific mortality and costs over time. As the model simulates individual patients over time, it updates risk factors and complications to account for disease progression. Results: Fifty-four publications resulting from 19 studies were included in the review. Overall, the evidence suggests that the Veo system reduces hypoglycaemic events more than other treatments, without any differences in other outcomes, including glycated haemoglobin (HbA1c) levels. We also found significant results in favour of the integrated CSII + CGM system over MDIs with SMBG with regard to HbA1c levels and quality of life. However, the evidence base was poor. The quality of the included studies was generally low, often with only one study comparing treatments in a specific population at a specific follow-up time. In particular, there was only one study comparing Veo with an integrated CSII + CGM system and only one study comparing Veo with a CSII + SMBG system in a mixed population. Cost-effectiveness analyses indicated that MDI + SMBG is the option most likely to be cost-effective, given the current threshold of £30,000 per quality-adjusted life-year gained, whereas integrated CSII + CGM systems and Veo are dominated and extendedly dominated, respectively, by stand-alone, non-integrated CSII with CGM. Scenario analyses did not alter these conclusions. No cost-effectiveness modelling was conducted for children or pregnant women. Conclusions: The Veo system does appear to be better than the other systems considered at reducing hypoglycaemic events. However, in adults, it is unlikely to be cost-effective. Integrated systems are also generally unlikely to be cost-effective given that stand-alone systems are cheaper and, possibly, no less effective. However, evidence in this regard is generally lacking, in particular for children. Future trials in specific child, adolescent and adult populations should include longer term follow-up and ratings on the European Quality of Life-5 Dimensions scale at various time points with a view to informing improved cost-effectiveness modelling. 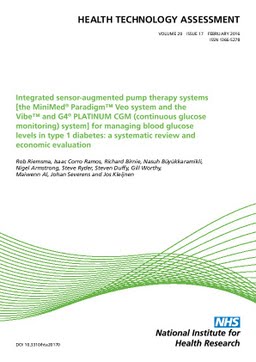