INTRODUCTION: Growth failure is a common feature of children with human immunodeficiency virus type 1 (HIV-1) infection. Children who are treated with mono or dual nucleoside analogue reverse transcriptase inhibitor (NRTI) therapy show a temporary increase in weight gain and linear growth rate. In adults, protease-inhibitor-containing antiretroviral therapy is associated with a sustained weight gain and increased body mass index (BMI). Experience with protease inhibitors and growth in children is still limited. The data mainly deal with short-term effects on growth. OBJECTIVE: To evaluate the effect of highly active antiretroviral therapy (HAART) on growth in children with HIV-1 infection. DESIGN AND METHODS: We analyzed selected growth parameters, clinical data, and laboratory results as part of a prospective, open, uncontrolled, multicenter study to evaluate the clinical, immunologic, and virologic response to HAART consisting of indinavir, zidovudine, and lamivudine in children with HIV-1 infection. Height and weight were measured at 0, 12, 24, 36, 48, 60, 72, 84, and 96 weeks after initiation of HAART. Information about the children's growth before enrollment in the study was retrieved from the hospital medical records and/or the school doctor or health center. BMI was calculated. z Scores were used to express the standard deviation (SD) in SD units from the Dutch reference curves for age and gender. Viral loads and CD4+ T-cell counts were examined prospectively and related to these growth parameters. z Scores were also calculated for CD4+ T-cell counts to correct for age-related differences. A z score of 0 represents the P50, which is exactly the age/sex-appropriate median. A height z score of -1 indicates that a child's height is 1 SD below the age- and gender-specific median height for the normal population. Virologic responders were defined as those who either reached an undetectable viral load (<500 copies/mL) or had a >1.5 log reduction in viral load compared with baseline at week 12 after the initiation of HAART, which was maintained during the follow-up period. RESULTS. PATIENTS: Twenty-four patients were included (age: 0.4-16.3 years at baseline), with a median HIV-1 RNA load of 105 925 copies/mL (5.03 log), a median CD4+ T-cell count of 0.586 x 10(9)/L (median z score: -2.28 SD), a median height z score of -1.22, a median weight z score of -0.74, and a median baseline BMI z score of -0.32. Eleven patients were naive to antiretroviral therapy, and 13 patients had received previous treatment with NRTI monotherapy. Twenty children used indinavir and 4 children used nelfinavir as part of HAART. VIROLOGIC AND IMMUNOLOGIC RESPONSES TO HAART: Seventeen children were virologic responders, and 7 children were virologic nonresponders. In patients naive to NRTIs, median baseline viral loads were significantly higher than in pretreated patients. However, at weeks 48 and 96, there was no significant difference between the viral loads of both groups. At baseline, there was no significant difference in CD4+a T-cell z scores between virologic responders and nonresponders or between naive and pretreated patients. During 96 weeks of HAART, the increase of CD4+ T-cell z score was significantly higher in responders than in nonresponders. The increase in CD4+ T-cell z score was not significantly different for naive and pretreated patients. HEIGHT, WEIGHT, AND BMI z SCORE CHANGES: We found that there was a trend toward a significantly increased z score change during 96 weeks of HAART compared with the z score change before HAART initiation for height and weight, but not for BMI. GROWTH AND VIROLOGIC RESPONSE TO HAART: When the data were analyzed separately for virologic responders and nonresponders, virologic responders showed significant increases in height and weight. The height and weight of virologic nonresponders did not change significantly. The BMI did not change significantly in responders or in nonresponders. GROWTH AND IMMUNOLOGIC RESPONSE TO HAART: The increase of weight and BMI z scores from baseline correlated positively with the CD4+ T-cell z score increase from baseline. It did not correlate with absolute CD4+ T-cell count increase. Height z score increase did not correlate with CD4+ T-cell z score or with absolute CD4+ T-cell counts. GROWTH AND PREVIOUS NRTI TREATMENT: The height z score decrease from week -48 to baseline was significantly larger in naive than in pretreated patients. The weight and BMI z score change from week -48 to baseline was not significantly different for pretreated and naive patients. From baseline to week 96, the height and weight z score change increased significantly in naive patients but not in pretreated patients compared with the change from week -48 to baseline. The BMI z score did not change significantly over 96 weeks of HAART for naive or pretreated patients. GROWTH AND CLINICAL STAGE OF INFECTION: The clinical stage of infection according to the Centers for Disease Control and Prevention classification correlated negatively with the BMI z score and the weight z score at baseline but not with the height z score. Thus, children with the most severe clinical disease had the lowest BMI and weight z scores at baseline. The BMI z score increased more in children with more advanced clinical infection at baseline, who had lower BMI at baseline. The clinical stage of infection did not correlate with the change in weight z score from baseline to week 96. CONCLUSIONS: HAART has a positive influence effect on the growth of HIV-1-infected children. This effect is sustained for at least 96 weeks. Height and weight are favorably influenced in children in whom HAART leads to a reduction of the viral load of at least 1.5 log or to <500 copies/mL and to an increase in the CD4+ T-cell z score. In contrast to the increase of the BMI in adults on HAART, BMI did not increase in all children effectively treated with HAART. BMI increased more in children with an advanced stage of infection and a poor nutritional status at baseline. Data from pretreated and naive patients were difficult to interpret, because the baseline characteristics of these 2 groups differed too much. 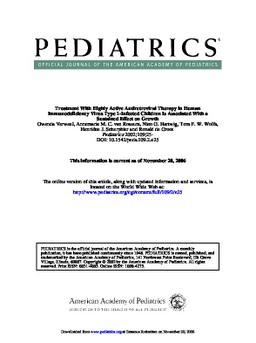