Living with two X chromosomes: of mice and women : studies on the initiation mechanisms of X chromosome inactivation in stem cells and mouse models, and the role of RNF12 herein

In this thesis work, we have investigated mechanisms involved in regulation of the initiation of X chromosome inactivation (XCI). Starting point was our earlier hypothesis that the initiation of XCI is a stochastic process, controlled in trans by autosomally-encoded XCI-inhibitors and X-encoded XCI-activators. The XCI-inhibitors prevent initiation of XCI in undifferentiated cells or early embryos. Upon differentiation of these cells during development, XCI is initiated in females only, by the activity of X-linked XCI-activators, which reach a higher concentration in female cells compared to male cells, due to the location of the encoding genes on the X chromosome. As described in Chapter 2, we found that the E3 ubiquitin ligase RNF12 acts as an important X-encoded activator of X chromosome inactivation. When extra copies of Rnf12 are transgenically expressed in male ES cells, the encoded higher level of RNF12 is able to induce XCI on the single X chromosome, whereas such over-expression in female ES cells leads to ectopic XCI on both X chromosomes in a significant portion of the cells. Rnf12 becomes up-regulated in female ES cells during the developmental time window when XCI is normally occurring, and genetic ablation of one copy of Rnf12 in female ES cells results in a significant delay in the XCI process. Chapter 4 discusses this discovery in the context of the stochastic model for XCI initiation, controlled by XCI-activators and XCI-inhibitors, and further provides evidence that all features of XCI initiation can indeed be explained by this model. A novel BAC targeting strategy described in Chapter 3 enabled efficient, fast and reliable genetic modifications of mouse ES cells, and this strategy was used throughout this thesis work. Among others, it allowed us to generate the Rnf12 homozygous knockout ES cells, described in Chapter 5. Using these cells, we provide evidence that RNF12 is essential for XCI to occur, and mediates its effect mainly through activation of the Xist gene. In Chapter 6, we show that this is an indirect mechanism, in which RNF12 targets the XCI-inhibitor REX1 for proteasomal degradation. The Rnf12 gene is located in the vicinity of Xist, which ensures rapid silencing of Rnf12 transcription in cis shortly after initiation of XCI. Chapter 7 addresses the question whether other genes located near Xist and Rnf12 are also functional in the regulation of the XCI process. We found that Jpx, Ftx and the Xpr region have a cis regulatory role, in which these regions likely create an open chromatin domain, which is needed to enable activation of Xist by the trans action of RNF12. We also provide data which suggest that direct interaction between the two X chromosomes in a female nucleus, X-pairing, is not functionally required for XCI to occur. Rather, more evidence was obtained supporting an indispensible role for the trans action of RNF12, during all stages of XCI initiation. In Chapter 8, we describe an Rnf12 knockout mouse, which we have generated from the Rnf12 mutant ES cells studied in this thesis work. As expected from the observations showing loss of XCI in Rnf12 homozygous knockout ES cells, homozygous Rnf12 knockout females are not born, suggesting that RNF12 has an important role in XCI initiation also during in vivo development. The ongoing analysis of these mice indicated that females heterozygous for the Rnf12 mutation also have an XCI phenotype, with transcriptional activity from two X chromosomes in some cells from adult tissues representing loss of XCI. This surprising and remarkable phenotype awaits detailed investigation. Finally, in Chapter 9, we proceeded to translate the newly obtained knowledge on the regulation of XCI initiation from mouse to human. We studied XCI in female human induced pluripotent stem cells, and provide evidence that the one X chromosome that is inactivated in a founder human fibroblast becomes reactivated upon somatic reprogramming. The General Discussion, Chapter 10, aims to integrate our current views on the initiation of XCI with previously published observations, and provides an outlook for future investigations. 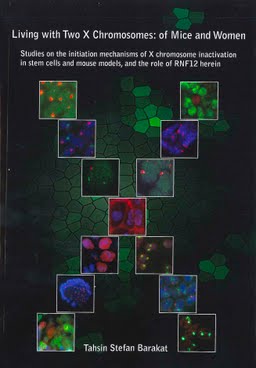