Chapter 2 Overweight and obesity As obesity is a major health problem associated with increased cardiovascular disease risks, the prevalence of overweight, obesity and body fat percentage in older people with intellectual disability through measurement of Body Mass Index (BMI), waist circumference, waist to hip ratio and skin fold thickness was studied and compared with prevalence of overweight and obesity in the general population. Associations of overweight and obesity with participant and treatment characteristics (gender, age, level of intellectual disability, Down syndrome, autism, independent living, smoking, (instrumental) activities of daily living, physical activity and use of atypical antipsychotic medication) were studied using regression analyses. Among 945 participants, overweight and obesity were highly prevalent, with more obesity (26%) than in the general Dutch older population (10%) as measured by BMI, and 46-48% obesity as measured by waist circumference and waist to hip ratio respectively. Women, people with Down syndrome, higher age, less severe ID, autism, people who are able to eat independently, preparing meals and doing groceries independently, people with physical inactivity and use of atypical antipsychotics were significantly more at risk of being overweight or obese.

Chapter 3 Hypertension, hypercholesterolemia, diabetes and the metabolic syndrome Hypertension, hypercholesterolemia and diabetes are important cardiovascular disease risk factors. Together with abdominal obesity they form the metabolic syndrome, which indicates metabolic disturbances, consisting of insulin resistance and accounting for a severe risk of cardiovascular disease. We determined the prevalence of cardiovascular risk factors and compared this with the prevalence in the same-aged general population. Furthermore we determined how many risk factors had not been previously diagnosed, and identified correlates of CVD risk factors (gender, age, level of ID, Down syndrome, independent living, activities of daily living, mobility, instrumental activities of daily living, physical activity, use of atypical antipsychotics, central obesity), using logistic regression analyses. Ninehundred-eighty people participated in this study. Hypertension (53%), diabetes (14%) and metabolic syndrome (45%) were present similarly as in the general Dutch population. Hypercholesterolemia was present less often (23%). Fifty percent of the people with hypertension had not been not previously diagnosed with this condition. Percentages for diabetes, hypercholesterolemia, and the metabolic syndrome were 45, 46 and 94 respectively. People who were more at risk for CVD risk factors were women, older people, people with obesity, people who lived more independently and people who were able to do groceries or prepare a meal independently.

Chapter 5 Association with anxiety and depression symptoms Depression and anxiety may be bidirectionally related to cardiovascular disease risk factors. Depression and anxiety may have biological effects causing glucose intolerance, fat accumulation and also lifestyle changes causing metabolic syndrome. But also the effects of diabetes, metabolic syndrome and subsequent cardiovascular disease may affect mood and anxiety. We studied the association between symptoms of anxiety and depression, among 990 participants who completed the screening instruments, with components of the metabolic syndrome, peripheral arterial disease and c-reactive protein. Of the 990 people who participated, 17% had symptoms of depression and 16% had symptoms of anxiety. In a multivariate logistic regression analysis a significant association was found between increased anxiety symptoms and diabetes only (OR 2.4, 95%CI 1.2-4.9). 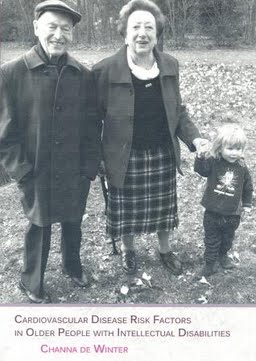